Skip to content
Posted inLoans
Posted by By admin July 20, 2021 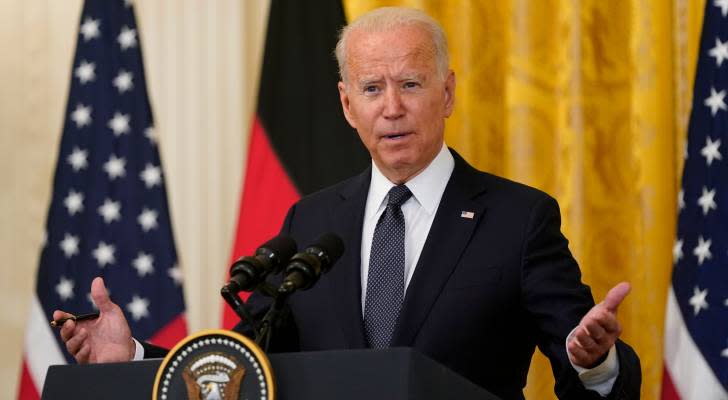 While President Joe Biden holds off on delivering sweeping student loan forgiveness, as he promised during the campaign, members of Congress are urging him to extend some stopgap relief for borrowers.

Federal student loan payments and interest are set to restart Oct. 1 following what will have been an 18-month pandemic pause, but lawmakers are arguing that neither the borrowers nor their loan servicers will be ready by then.

They’re asking Biden’s administration to extend the moratorium — maybe so they can buy themselves more time to win him over with their plan to cancel $50,000 in student loan debt per person.

Democratic senators think they have a pretty persuasive argument that could give millions of Americans with student loans additional breathing room to take care of expenses and deal with other debts.

The moratorium on student loan payments has been in place since March 13, 2020, during the early days of the COVID crisis.

It was initially meant to expire after six months, but it’s been extended a few times since then. With the current end date set at Sept. 30, borrowers and servicers alike are anxiously waiting to hear whether they’ll get another extension.

In a letter to Biden this week, Democratic Sens. Elizabeth Warren and Edward Markey, both of Massachusetts, say borrowers have benefited greatly from the pause in payments, and have been able to pay down credit card and other debt balances, meet immediate financial needs and support their families.

Based on Federal Reserve data, 45 million Americans currently share $1.7 trillion in student debt. They’ve been saved from around $72 billion in interest charges over the last 15 months of paused payments, the senators say.

In their letter, the senators say they’d like to see the moratorium extended until at least March 31, 2022, to give Congress time to resolve issues with the federal student loans system.

“As the economy recovers from this unprecedented crisis, borrowers should not be faced with an administrative and financial catastrophe just as they are beginning to regain their footing,” they write.

Warren and Markey argue that not only are borrowers unprepared to begin paying back their loans, but so are the servicers — who have never tried to move 43 million-plus accounts back into repayment status at once.

The senators say loan servicers told them they are having a hard time getting in touch with all of their borrowers, and need time to build up their workforces to support borrowers through the transition.

These issues, the lawmakers say, could have serious negative effects on borrowers, possibly preventing them from hitting other financial milestones, like taking advantage of today’s low mortgage rates to buy their first homes.

In his presidential campaign, Biden promised to cancel $10,000 in student loan debt for every U.S. borrower. Some Democratic lawmakers, including Warren and Senate Majority Leader Chuck Schumer, say that doesn’t go far enough — and they’re advocating for $50,000 in forgiveness.

While Biden’s recent budget proposal didn’t include any student loan forgiveness, he hasn’t necessarily ruled it out. He has already canceled about $3 billion in student loan debt related to specific circumstances.

About $1.6 billion has been forgiven for borrowers who said they’d been ripped off by their schools. Most recently, $55.6 million in debt was wiped clean for former students of three schools that made “widespread, substantial misrepresentations” to students, the Department of Education said.

But the $50,000 question still hangs in the air. Biden’s education secretary, Miguel Cardona, has supposedly been studying for months whether forgiving that much student debt per borrower is within Biden’s power.

What to do if you need relief ASAP

If you’re one of the millions of Americans grappling with mountains of student loan debt, you have a few options to lighten your load while the administration keeps mulling over the issue of broad debt cancellation.

As a first step, you could look into refinancing your student loans. Interest rates on student loan refinances from private lenders have hit record lows, so a refi with a new private loan could cut your monthly payments substantially.

If federal loan forgiveness ever does happen, it wouldn’t apply to private loans.

If you own your home, you might refinance your mortgage. Some 13.9 million mortgage holders could save an average $293 a month with a refi, according to mortgage technology and data provider Black Knight.

The best home loan or student loan refinance rates go to borrowers with the highest credit scores. If you haven’t seen your score in a while, it’s easy now to take a look at your credit score for free.

With your debt managed, your next step could be to give your bank account a boost — maybe with some low-stakes investing in the stock market. One wildly popular app helps you build a diversified portfolio using little more than your “spare change” from everyday purchases.

How to quit smoking: 5 actions you can take now to stop