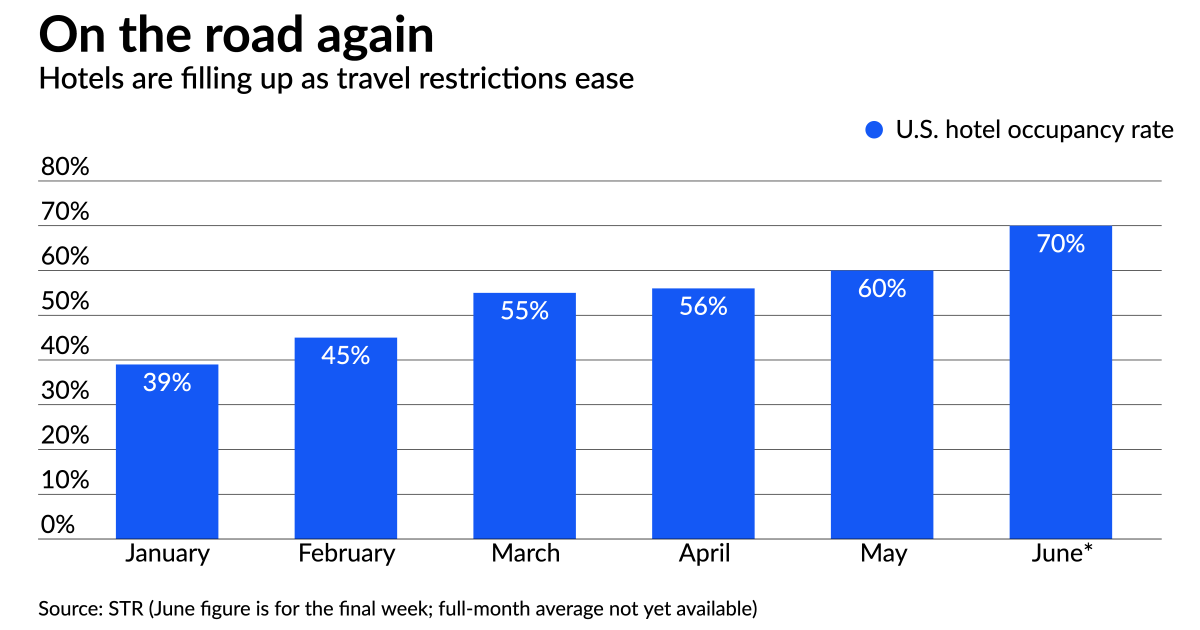 Consumers are booking hotel stays at near prepandemic levels, and banks that serve the hospitality industry are seeing a concurrent drop in hotel loan delinquencies.

But even as vacationers return to airports and hotels, business travel is still lessened by the widespread shift to remote work and the rise of virtual events over in-person conferences. Companies may also be reluctant to approve travel as the delta variant of the coronavirus spreads — a factor that could also lead to new travel restrictions for consumers.

“The pent-up demand has been unleashed, but you can’t forget the pandemic is still with us and could still cause new problems,” said Mike Matousek, head trader at U.S. Global Investors.

Trepp, a commercial real estate data firm, said the total delinquency rate on commercial mortgage-backed hotel sector loans declined to 14.2% in May from an all-time high of 24.3% in June 2020. The delinquency rate, which refers to loans that are more than 30 days behind in payment, was 1.53% in March 2020.

Bank regulators allowed special pandemic loan forbearances that enabled hotel owners to defer loan payments to 2021, warding off credit woes. But bankers nevertheless worried that if travel failed to rebound this year, those loans would come off deferral and quickly sour. Loan losses would pile up.

Vaccinations turned this trend around. The U.S. Centers for Disease Control and Prevention says about 60% of American adults are fully vaccinated against the coronavirus, and 68% have had at least one dose.

Leisure travel is essentially back to normal, with business travel lagging in part because conventions and in-person business meetings take time to organize, Anthony Capuano, CEO of Marriott International, said in June at the Goldman Sachs Travel & Leisure Conference, a virtual event. “But the trends are encouraging,” he said.

There are other important indicators to watch, according to Trepp analyst Jyoti Yadav. On June 11, the Transportation Security Administration reported more than 2 million travelers for the first time in more than a year. Daily travel volume hadn’t reached that threshold since March 7, 2020, just before the U.S. declared a national emergency. The figure dropped to as low as just 87,500 in April last year.

The rise in travelers “is undoubtedly good news for airlines, as well as hotel owners and operators across the U.S.,” Yadav said.

The hotel sector was the most stressed by the pandemic — but a recovery has taken hold, according to Moody’s Investors Service. That recovery is starting to show in the decline of delinquent loans from the hospitality sector.

“Though the CRE lenders we rate have varying exposures to hotels and retail, they all reported a rise in nonaccrual loans as a percent of total gross loans last year,” Moody’s analysts said in a report. “However, most lenders reported a decline in nonaccruals in the first quarter” and the trend is expected to continue.

Some segments of the hotel industry dependent on business travel could still struggle, or have to adapt and cater more to vacationers. But barring major virus setbacks, credit quality is expected to prove strong through the rest of this year and into next, with most releasing loan-loss reserves if they haven’t already, said Larry Mazza, president and CEO of the $2.6 billion-asset MVB Financial in Fairmont, West Virginia.

“Our concerns have subsided greatly,” Mazza said. “We lend to some hotels, and all of them are coming back nicely; loans are performing well. Consumer travel is back big; business travel is coming back. People want to get back to normal, to interact and travel — and the hotels are bouncing back as a result. … Knock on wood, things are looking pretty darn good.”